My aunt, Dr. Amy Wagner, has been all over the globe in search of corals. Since 2005, she has collected hundreds of coral samples from places like the Gulf of Mexico, Micronesia, the Caribbean and Antarctica.

As my father puts it, “She chose her career wisely.”

Why she was running around the world plucking sea life from ocean rocks was largely a mystery to me—until, that is, she presented some of her research at “Science Night Live” in Lodi on Wednesday, July 1st.

Nearly 35 people—including a California congressman—packed into the World of Wonders Science Museum for tacos and Wagner’s presentation over her second trip to Antarctica in early 2015. Aboard the RVIB (Research Vessel Ice Breaker) Araon, she collected hundreds of deep-sea corals from the Ross Sea for analysis and study.

“My research is focused on paleo-oceanography—that’s trying to determine what the ocean was like in the past,” said Wagner, an Assistant Professor of Geology at California State University Sacramento. “It can be on scales of several hundred years to the last hundred years, depending on what kind of questions we’re trying to answer.”

Those questions vary, she said—sometimes researchers want to know what the sea-surface temperatures were back before the instrumental records were kept. Sometimes they are more interested in other ocean conditions like salinity (salt levels), which can provide more information on atmospheric conditions.

The answers to these questions are often found in coral samples taken from all over the world—including some surprising places. Most people think of brightly colored tropical reefs when they hear the word coral—“Tahiti,” said one listener when Wagner asked where corals could be found. “Hawaii,” said another. “Australia,” someone added.

All correct, but there are two types of corals, my aunt explained, and the flamboyant tropical ones everyone thinks of are surface corals. They are generally collected by divers, and contain a lot of information on surface temperatures.

Deep-sea coral, on the other hand, is found all over the world. It is collected by remotely operated vehicles or by small manned submarines—or, in Wagner’s case, by a dredge— off the coasts of Europe, the Americas, East Asia, Australia and of course Antarctica.

But why collect it all? As it happens, sea temperatures and salinity going back hundreds of years can be found in coral growths, showing what the ocean was like centuries ago.

“It’s important to understand where we are today in context of the past,” Wagner said. “That information is what gets put into climate models and forecasts for the future.”

The record of the Antarctic corals is especially important for those models, Wagner explained, because Antarctica sits at one of the two powerhouses of the Global Ocean Conveyor Belt—the system of warm and cold currents that move the waters of the world.

It works partly because in the Antarctic, the seawater freezes slowly and the salt precipitates out, Wagner said, creating a very dense, very cold layer of very salty water under the ice. This cold, dense water displaces warmer water, which moves north and circulates around the globe.

“Changes that have been documented in the instrumental record show the circulation has been changing in the last few decades,” Wagner explained. “One of the big questions is, ‘Are those changes different, or have they happened in the past?’ That’s important moving forward as we think about what the climate is going to look like with climate change.”

Wagner brought a few coral samples to Science Night Live—the same ones she brought to her interview on Capital Public Radio earlier that day. She also brought two Styrofoam cups along—one normal, one shrunk to about a third of the size and decorated with a marker.

On research cruises like the Araon’s, Wagner explained, researchers will write and draw on these cups, put them in a bag, and tie them to the equipment that is then lowered to collect samples.

“When that cup goes down to that pressure, the air compresses,” Wagner said. “It squeezes out the air, and the cup shrinks, and it doesn’t go back into those holes because there’s no way to get the air trapped in it.”

“We do it because we’re trapped on a 300-foot-long ship for eight weeks,” she added. “You have to find ways to entertain yourself.”

To illustrate how scientists can get data from collected corals, Education Program Coordinator Nick Gray of the World of Wonders Science Museum asked the audience to build the tallest tower possible with the LEGO bricks he provided on the tables.

“You were supposed to be building in layers,” Gray said with a chuckle after some participants built their towers with the pieces on end. The tallest reached 17.5 centimeters—almost 7 inches.

“Coral incorporates the chemistry of the ocean, locking it into its skeleton,” Wagner said after the example, explaining that the animal grows a bit like a tree, with branches and rings. Scientists can determine ocean conditions at a given time by carbon dating segments of the skeleton and analyzing its chemistry.

After the presentation concluded, some members of the audience came up to Wagner with questions. U.S. Representative Jerry McNerney, whose district includes Lodi, was among those that stayed for a few minutes to talk to Wagner before leaving.

“It’s nice to see some science in action, to see a local oceanographer bring back some research to share,” McNerney said of the event. “It’s good to see local people interested.”

Two of those interested locals were Ron and Susan Heberle; Susan Heberle asked Wagner if she had taken the different oxygen isotopes into account for the tests. My aunt said yes, the researchers are considering both oxygen and carbon isotopes when they test the samples.

The Heberles had never been to a Science Night Live before, but they said it would not be their last. Ron Heberle is a member of the Board of Education of the Lodi Unified School District; Susan Heberle is a coach for the U.S. Department of Energy’s National Science Bowl and the event coordinator for the Science Olympiad Dynamic Planet event, so both are very passionate about science education.

“Come on, science is interesting!” Ron Heberle said. “Science is everything. Science is fun!”

I agree, and my aunt the traveling oceanographer does, too. Figuring out our planet’s future by hopping from one coral reef to the next is definitely fun. 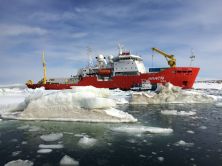 The RVIB Araon in the Ross Sea, off the coast of Antarctica. (Image Credit: Amy Wagner) 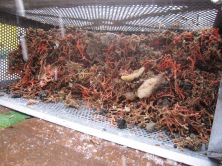 This deep-sea coral from the Ross Sea is estimated to be 800 to 1000 years old. (Image Credit: James Eldred)

Unlike other corals, a solitary coral (right) is a single polyp that grows alone, outside of a colony. (Image Credit: James Eldred)